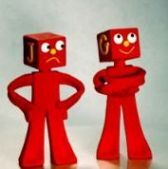 The Blockheads are the series main antagonists, they're humanoid, red-colored figures, with block-shaped heads, who make mischief and wreak havoc all the time. There are 26 blockheads, each having a certain letter on both sides of their heads, though the two most featured blockheads are Blockhead G and Blockhead J, who're Gumby's Nemeses. Blockhead G's most likely the dominant one of the duo, while Blockhead J usually gets slapped more often.

The Blockheads never speak, communicating purely through gestures or pantomiming. Their reasons behind terrorizing Gumby and those around him are never elaborated on, suggesting they're simply malevolent in nature. However, the 2017 comic revival, reveals that they're evil because they're a minority group oppressed by the clay people simply due to the shape of their heads, and therefore, desire revenge.

Blockhead B with Blockheads G & J in "The Gumby League".

Blockhead C in "The Gumby League."
Add a photo to this gallery

Retrieved from "https://gumby.fandom.com/wiki/The_Blockheads?oldid=5876"
Community content is available under CC-BY-SA unless otherwise noted.