Pokey is a talking red horse who is the deuteragonist of the series. He is also Gumby's sidekick and best friend. His favorite food are tacos. He usually gives Gumby worrisome advice, but Gumby rarely listens to it. He first appeared in the 1955 short, The Little Lost Pony. He is voiced by Mike Labonte. In the upcoming reboot, he would be voiced by Eric Bauza. 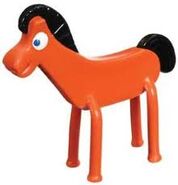 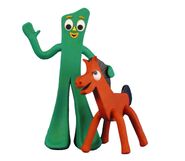 New Pokey
Add a photo to this gallery

Retrieved from "https://gumby.fandom.com/wiki/Pokey?oldid=5700"
Community content is available under CC-BY-SA unless otherwise noted.